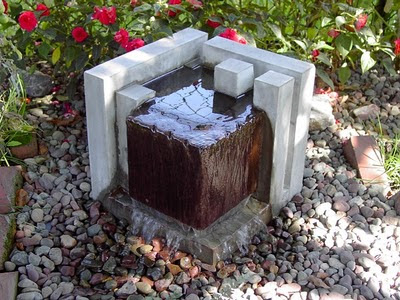 This fountain's outermost edges are exactly 12"x12"x12" - one cubic foot.  Water flows up through it, fills its single basin and then spills over the side through the rocks on the ground and into a second basin hidden underneath that conceals both the pump and the heater.

In this case the heater was located next to but below the pump, to prevent the exposure problems that previous fountains experienced..

This fountain was cast with the help of my buddy Philly who had fifty years of experience working with concrete.  He suggested I use high-strength grout instead of ordinary concrete.  We used 5500 psi grout.  This gave it a lighter grey appearance and a finer more bubble-free surface finish because the grout (when workable) is substantially less viscous than concrete.  Over time it's cracked and discolored, but it is still in use, and has outlasted all my previous cast fountains.  It has run everyday, all day since 2004, and is currently on pump #3 and heater #6. 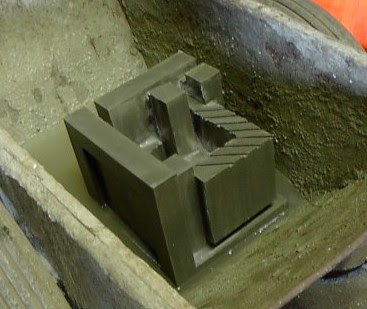 After it came out of its mold I let it cure for another few days underwater in order to get its strength to come up as much as possible. 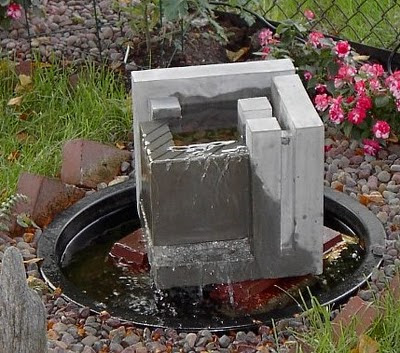 Here you can see the basin installed underneath the garden rocks. 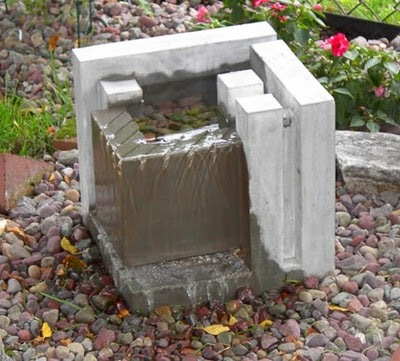 The lower basin is then filled in with rocks.  The rocks serve as a natural filtration of the water, and prevent detritus (leaves etc.) from clogging the fountain, which had been an issue on previous casts.  This photo was taken on its first day of operation.  The black color seen in the photograph at the top is is the dark green of the surface algae growing on the concrete.﻿ 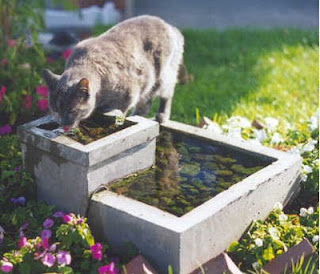 On July 4th of the following year I began working on the mold for the next fountain.  This one was cast with ordinary concrete with a heavy cement to aggregate ratio.  In order to minimize cracking, the walls were made especially thick, and reinforcement was left out.
The pump was contained in the lower basin, and connected by rubber tube to the upper one.  The same lava rocks used in the two previous fountains were used in the bottoms of both pools.
Two problems showed up immediately.  The first was the apparent blow out of three sides of the upper basin (which upside down would be the deepest part of the mold - where pressure is greatest).
Because I wasn't all that skilled with a grinder I decided to leave the blowouts as they were.  The second problem was with the spill slot in the upper basin - it was too shallow.  The cast slot was only an inch deep.  Water pumped to the upper basin would fill it, and then overflow its outside edges.  I had to lower the edge of the slot, effectively enlarging it so that enough water could flow through to keep up with the pump. 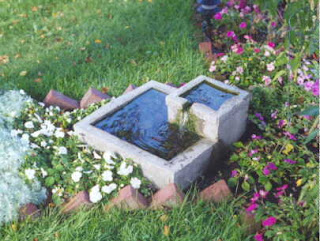 This fountain, unlike the others which were on timers, ran all day, and all year.  I installed a 150-watt aquarium heater to prevent freezing.
Birds went crazy for it in the cold weather, and at least once we caught doves sleeping in it overnight - the water temperature was a warm 50 degrees, and the air temperature was in the single digits that night.  The birds stayed with just their heads above the surface.
This fountain lasted longer than the two that came before it, five years.  In its fifth winter, the heaters started to give me problems - they'd crack.  Replacement heaters, even ones meant for bird baths were of no help.  Birds would splash water out of the fountain during the day, the heater would be exposed, and when it was refilled, the cooler water shattered the hot glass of the heater.  The final winter, cracks appeared in the walls of the upper basin, where the concrete was only an inch thick.  By that summer, it could no longer hold water. 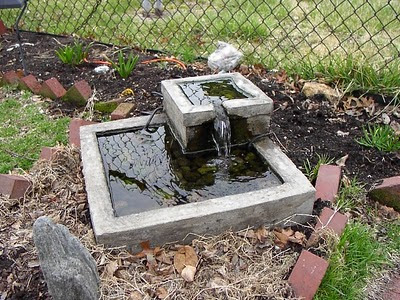 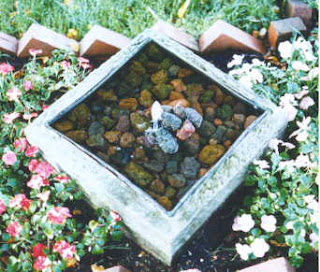 The summer after the pyramid fountain collpased, I cast this one.  It was 6" deep overall  with a 3" solid base, reinforced to prevent it from cracking.
Like its predecessor it also had an acrylic box inserted within it to contain the water, and a flexible rubber liner underneath that.  The power cable for the pump simply stepped over the lip instead of being cast into the base.  The lava rocks stayed too.  The action of the pump created a 4" plume of water at the center that washed over the rocks covering the pump.
This fountain lasted two years before it cracked beyond repair.
Posted by Rob Rainone at 9:46 PM No comments: 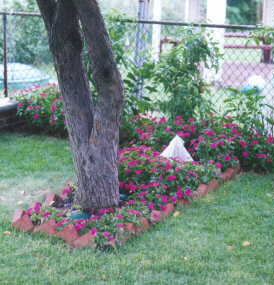 Ordinary concrete will not contain water, which given enough time will wick its way through.  All the same I've made a series of fountains for my backyard over the years.  This was my earliest attempt. 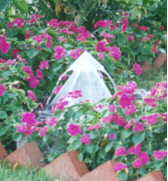 It's an acrylic box, containing an acrylic pyramid, , the base of which was cast into vinyl concrete patch.  I thought the vinyl in addition to the acrylic would keep it watertight.  The power cord for the pump was cast through the side of the concrete.﻿  The pump was placed under the pyramic and connected to the top of it by means of a clear hose.  The larger pyramid had a smaller one on top of it rotated forty-five degrees.  Water poured off the inside of this smaller one in two small streams on opposite sides.  ﻿ Lava rocks were placed along the bottom.  It was my own metaphor for earth (the concrete), air (the pyramid), fire (the lava rocks) and water. 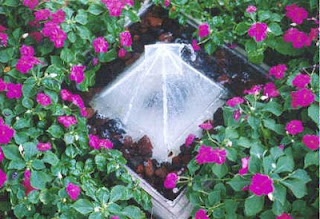 ﻿By the end of summer the concrete had cracked.  By the end of fall it could no longer contain water.  The following year it completely fell apart and collapsed.
Posted by Rob Rainone at 9:27 PM No comments: 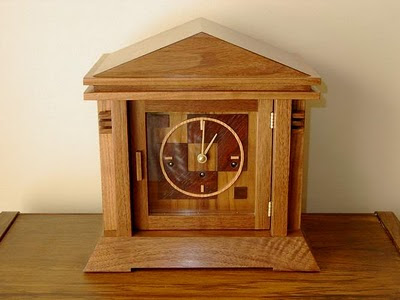 While working on the model of the loft apartment I placed a clock on the mantel.  I thought it looked good and included some detail on it.  The more I detailed it the more fascinating it became to me.  In order to develop it further I took the original model from the greater loft model and separated it out.
I drew full scale working drawings of it.  The face door swings open to wind the strikes.  The back is removable to access the mechanism.  And the top conceals a hidden compartment that holds the winding key.  Note: I didn't design the clockworks, only the wooden cabinet that houses them, the 'body' of the clock. 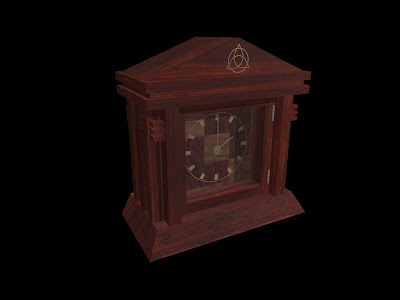 ﻿In the course of designing it completely, it changed substantially, so I updated the 3D model to reflect those changes.

I found a professional furniture builder and clockmaker in Sandy Utah, Lawrence Cooke, to construct it for me and hired him to do so.  The following pictures of its construction and their captions are his.
﻿
﻿
﻿﻿﻿﻿﻿﻿﻿﻿﻿﻿
﻿﻿﻿﻿﻿﻿﻿﻿﻿﻿ 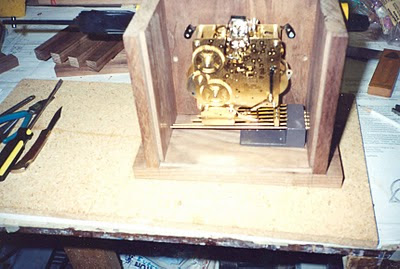 Posted by Rob Rainone at 3:48 PM No comments: