The Second Cutting - The Male Nude While the 16"x20" was acceptable for determining if the colors and the image were suitable, I really wanted to create something larger, 30"x40".
In order to show more detail I added another layer, bringing the total to six, black being the one on top, and then five shades of brown/beige down to an offi-white.
The size of this 40"x28" made it somewhat unwieldy to cut and glue together, so much so that looking back on it, it reads as fairly crude.
The original photograh required a lot of retouching and photoshop play in order to get it to where I wanted it to be for translation into a cutting.
In addition, this work more than any other laid bare for me how important color selection was in the choice of the mats.  I bought and cut the mats, and then realized that the bottom two were too light compared to the top four.  I inserted a color between layers three and four and recut the lower ones. 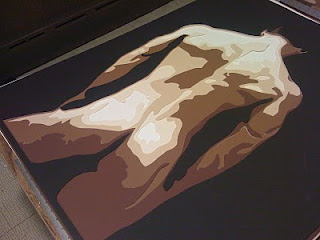 In the photo on the right you can see the stark contrast between layers three and four. 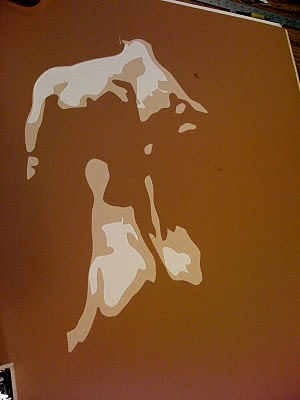 Some friends have suggested that I deliberately leave layers out, especially the darker ones, which adds an ambiguity as to the subject matter.  I'm on the fence about this.
I generally enjoy that from a distance or if slightly blurred my work which is neither a painting nor a photograph can easily be mistaken for the latter.
Posted by Rob Rainone at 12:27 PM No comments:

The First Cutting - The Female Nude 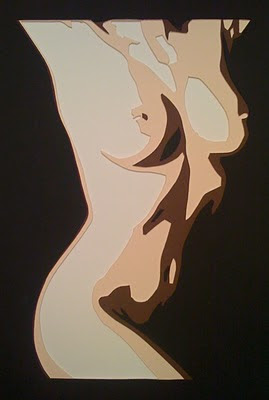 I set out to decorate my apartment with work that I created.  After several hours painting only a few square inches and being displeased with the result I thought there had to be a faster way.
I remembered hearing that Van Gogh, in his later years when his vision was failing, took to cutting out paper to create his work, and I had recently read about the artist, Brian Crede, similarly using cut paper to create not just pieces of his work, but the entire image.
Using paper seeemd to be a great way to quickly create a large work, and I had a lot of wallspace to fill.  So I set about testing it out.
Each layer is lighter than the one on top of it and darker than the one below it.  The cut out portion of one reveals the colors of the ones underneath, giving it a sense of depth.  It reminded me of my earlier single color paintings; each layer representing a single shade of a different color in between the extremes of black and white.
The piece above, measuring 9"x12" is the first result,  a nameless woman's torso, cut out of matboard (not paper in the strict sense of the word) which served to stiffen the piece and give it a visual depth.  It was fairly simplistic and my choice of colors wasn't the best.  Even at a distance I don't think the image is all that clear.  One family member mistook it for a tree. 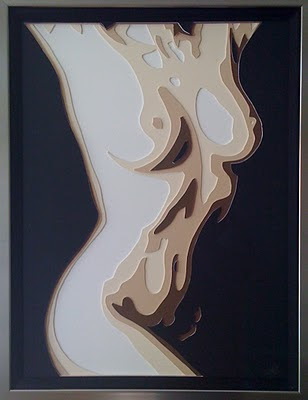 But if I squinted at it or stepped back far enough to make it blurry, the original image was still discernable, if less than perfect, so that kept me motivated.  A few months later another family member asked me to recreate the work, bigger and in different colors.
In order to make it more clear about what the subject matter was I inserted a layer to see if it would provide more detail.
Additional layers do provide more detail but the more of them there are, the more difficult it is to control the relationships between them, and the more precise my cutting needs to be.