When the small glass candlebox began to crack I thought the most likely cause was the close proximity of the candleflame to the glass.  In order to increase the distance from the flame to the box, I made it bigger, increasing its size from 3" square to 4" square.  I also decided to reduce the size of the glass, figuring that it were smaller, the expansion of it under flame would be less. 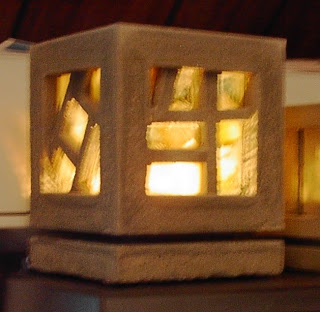 The blue one was done first, each of its four sides was different, consisting of alternating 4 and 5 pieces.  The yellow one was done a week later with alternating 5 and 6 pieces per side.  Candlelight looks brighter when passed through warm-colored glass.  Also, the structural elements of the blue one appeared very substantial and I thought it might be interesting to thin them out, so when I cast the yellow one I deliberately thinned some of the interstitial elements to barely more than 1/8".
Posted by Rob Rainone at 10:16 PM No comments: 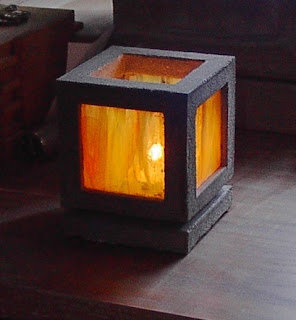 When I couldn't make the concrete thin enough to transmit light I thought it might be interesting to do a casting where the concrete had stained glass set within it.  Four separate panes of yellow stained glass are set, one in each side.  As with the slotted candleboxes, this is 3" square and 3 and 11/16" high.  The glass is true divided light, bitten by the concrete - it is not placed only on the inside.
During casting, one of the panes came loose from the mold and moved (not visible in this photo).  And although it came out of the mold in excellent condition, over the next two weeks it began to crack, at first the glass, and then the concrete.  The cracks aren't structural, but they do destroy the aesthetic of what I was trying to achieve. 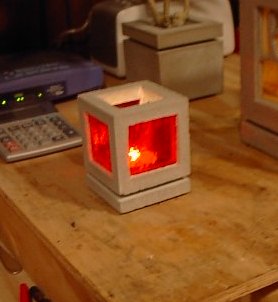 A few years later I cast a second small candlebox with deep read mottled glass and the same non-shrink grout I used in the Test Panel.  It came out great, but also cracked over time.
Posted by Rob Rainone at 9:43 PM No comments: 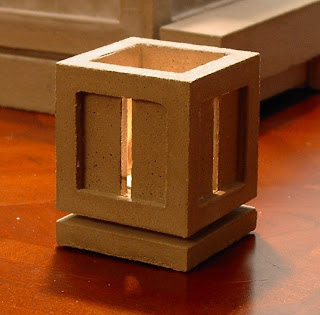 In school I visited the Beineke Rare Books Library at Yale University, a near windowless box whose walls were made of inch-thick slabs of marble that were nonetheless thin enough for sunlight to show through.
I wondered if it was possible to make concrete thin enough to get it to admit light. Even at 1/16" it still won't admit light (and yes, I know about LiTraCon).  Instead I chose to cut slots into the concrete.  At first one slot on each side, and then several.  Because most people think of concrete as an especially heavy, clumsy material, I enjoy when I can execute a design that allows it to show off its elegant side. 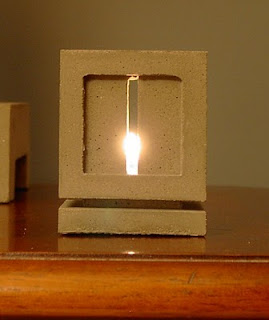 The cube is 3" square and a 3" tall plus the base - but it was also done in a single cast.  The candlebox below is identical except it has multiple slots per side.  In order to give the vertical elements in between the slots more stability, I added cross connections at random heights. 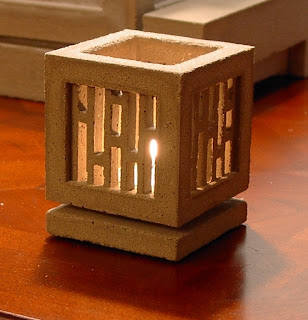 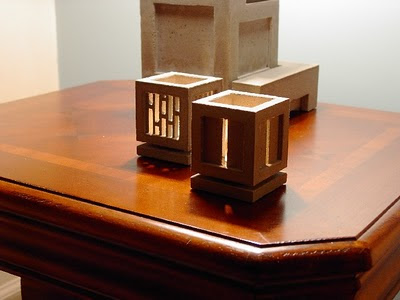 These weren't that hard to make, but I only ever made two of them, I'm not sure why I didn't explore the idea of piercing other patterns into the sides of the cubes.  Maybe this is something I'll follow up with in the future.
Posted by Rob Rainone at 9:17 PM No comments: 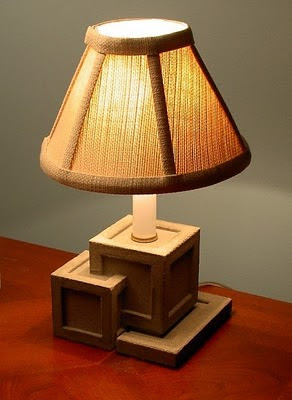 This lamp is about 10" tall and the base is 5" square.  The interlocking of the cubes was more difficult than it looks - the recesses on each side of the blocks make the mold exceptionally complex.  Unlike the larger lamp, the threaded rod holding this one together is not cast into the concrete, it was added to a hole cast through the block.  Also unlike the larger lamp, this was done as a single cast.
Posted by Rob Rainone at 6:32 PM No comments: 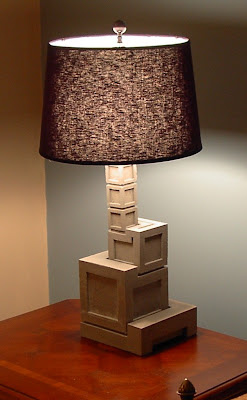 I'm not sure what motivated me to start working on this lamp,  but I realized early on that the cast would be too deep and too complicated to build in one piece, so this became one of my earliest designs, cast in multiple parts and assembled together.  It consists of a series of cubes stacked upon each other.  Each steps in 2".  The base is 8" square, and rises to a column 2" square at the top.
Each block also has an inset in the top of it to allow the block above it to rest.  This inset is along its edge.  This was done to allow for variations in the size of the casting so that if one of the blocks was a little too big it would simple overhang the block below it.  The 8" base, 6" cube, and 4" cube are individual casts with holes cast through them to allow for the wiring.  The final stack of three 2" cubes were done as a single cast, and had a threaded rod cast into them.  This rod extended through the lower portions of the base to a piece of wood and a nut that locked the entire assembly together.  The shade was an off-the-shelf shade that I never liked. 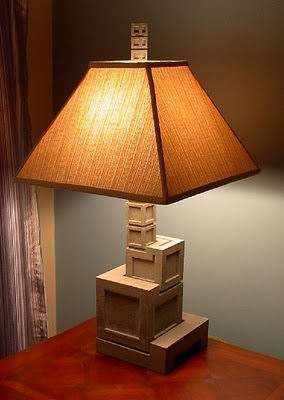 A few months later I had a shade specifically made for it.  Although the lamp base almost demands a cubical shade, I decided to just go with a square pyramidal one instead.  I kept it on a low table, and if I'd gone with the cubical shade, the bare bulb would have been visible through the top of the shade.  In addition, I cast a small finial of three small 1" cubes, which gave the lamp the appearance of a stack of cubes riding uninterrupted through the shade.
Posted by Rob Rainone at 10:01 AM No comments:

While I was still in school I developed a fascination with concrete.  I liked the permanance of it, the fact that actual buildings were made of it, and using simple paper molds I could make fairly complex forms of it.  The earliest of these were concrete vases, the first of which was large, 18" tall and 6" square.  I didn't vibrate the form so the mix didn't fill the space completely.  The result was interesting but not what I was going for.  Subsequent vases were smaller, 8" tall and 3" square.  I produced a few dozen of these, but gave most to family and friends who admired them before I could photograph them.﻿﻿
﻿
﻿
﻿

The vase in the second picture is a variation on the themes of the first one, and marks the first time in my cocnrete work that not all of the edges were canted to allow for easy formwork removal.  In virtually all of my later work, no edges were canted.  On small scale concrete casts like these, and with paper or flexible rubber molds, it is completely unnecessary.
Posted by Rob Rainone at 9:30 AM No comments: