Even though it wasn't within my job description, I was asked to design a company Christmas Card.  I chose a complex, uninteresting site photograph with a group of men working.  Using photoshop I "painted" santa-style hats on the men, and falling "snow" on the rest of the image.
The punchline came inside the card, "Not all elves build toys."
This card won me a backpack.
It turns out, our insurance company, which insures more than just general contractors, holds an annual holiday luncheon during which they display all the cards they receive in December.  The employees then vote and award a prize for the one that celebrates the holiday season and best exemplifies the work of the submitting company. 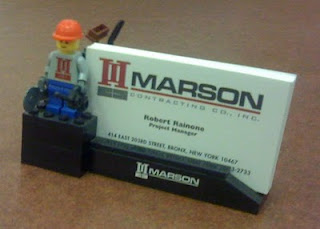 It should be noted that Lego does not in anyway endorse this.
Posted by Rob Rainone at 10:23 PM 2 comments: