In addition to the cast concrete logo, the office addition of 2007 invovlved other unique architectural features.  One of them was the idea of light pipes.
The design called for a half dozen individual offices to be positioned against the 12" thick, concrete block, outer wall of the building.  The original plan involved cutting windows in each of the partitioned offices.  When examination of the wall showed that it would be inadvisable to cut such large openings along the base of a 30' high wall, I came up with the idea to "pipe" in the light from outside.

Instead of cutting 4'x5' openings, we would instead core-drill a vertical row of 6 holes, each 2" in diameter.  Solid acrylic rods with sharpened polished ends would be inserted through the openings protruding from the otherwise flat surface of the exterior, and southern-exposed wall.  The sharpened ends would catch the sunlight, and act like giant fiberoptics

On the inside, a specially designed wooden light fixture (non-electrical) would support a seventh vertical acrylic rod, notched to receive the 6 that pierce the wall.  The seventh rod was actually inserted within and through a series of 6 acrylic cubes.  The cubes are strictly decorative, and help to mask the circular aspect of the pipes.

In order to demonstrate that the effect was possible, I built a functioning, scale model.  The seventh vertical rod is missing in this case, the six hornizontal ones in the model pipe light directly into the cubes.


The goal wasn't to provide a view like a window.  It was to allow the office occupant, with no access to the outside, to be able to discern the natural cycle of daylight time and weather conditions as indicated by the continuous change in the appearance, angle, and color of the light emerging from the pipes. 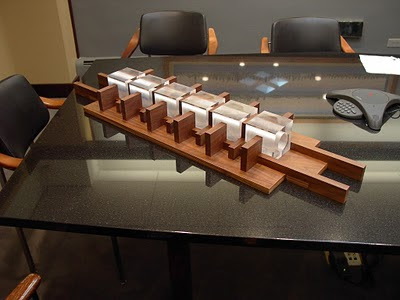 Because glare was expected to be an issue, the fixtures were located behind the desks of the office occupants, and not in line with the reflective view of any computer monitors.
The images above and to the right are of the finished full scale interior light fixture. 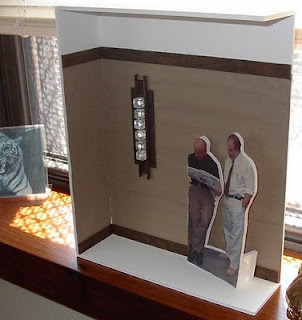 To the left is a photograph of the scale model on a windowsill.  The back wall of the model is correctly scaled, and the light coming through the cubes is traveling through the equivalent of 16" of solid wall. 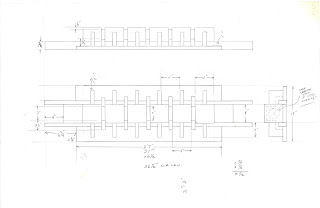 Below is the original concept sketch for the acrylic cubes and to the right is the to-scale working drawing of the sconce as constructed. 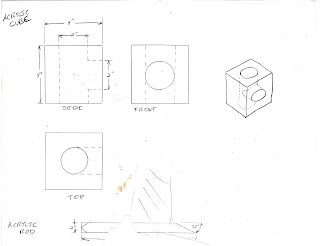 Posted by Rob Rainone at 3:51 PM No comments: