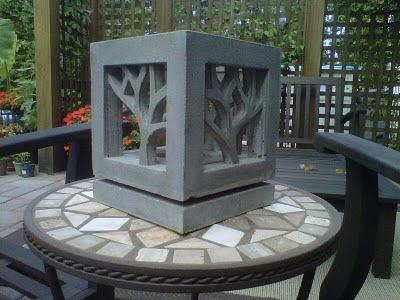 The candleboxes with the stained glass were continually cracking so I wanted to be sure that it was the glass that was doing it.  In order to test that out I cast a candlebox that had no glass.
One Christmas I made a series of them as gifts for friends and family.
The two major differences are that it's made out of ordinary concrete - portland cement and play sand in a 1:1 ratio with a lot of water (I had to be sure that the mix would fill the mold) and the web on top.  Concrete can withstand a great deal of heat, and most candle lanterns are completely open at the top in order to dissipate the heat.  I thought it would be interesting if this one had a web on the top similar to the ones on its sides. 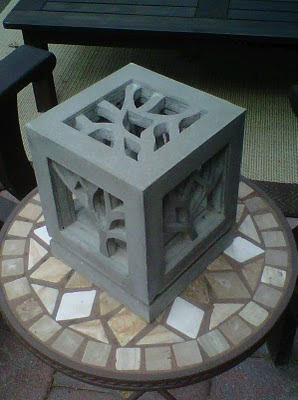 ﻿The votive candle within is small enough to fit through the webbing on one of the sides to allow for insertion and removal of the candle and its glass jar.

This cast was done in a single pour, not assembled from separate casts.  The box which formed the center opening was made of foamboard.  In order to demold the cast, this box had to be cut up through the concrete webbing and taken out a piece at a time.
Posted by Rob Rainone at 10:15 PM