It's Him or Me - Test Proof In order for me to sell the cuttings I needed to rely on photographs that were more professional than the ones I'd been taking.
Dylan Rosser, a well known photographer of the male nude form was one of the first to give me permission to create a cutting.  I chose to create a cutting of his photo of the British model Charlie Rawlins.
The image to the left is a photograph of my proof.  The shades of blue I had used for the Troy Cutting worked very well together and have since become a method I use to test how well an image translates into the medium.  Dylan Rosser models typically have a sheen on them and high contrast which makes them particularly suited to my interpretation. 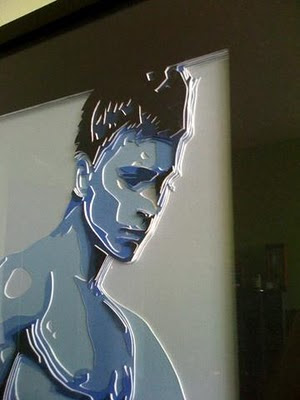 Like the Nude Female and Nude Male sample cuttings, each of the mats is laid one on top of another, cut out to show the colors of the mats underneath.  When viewed at a distance it reads like a photograph.  Lest anyone think that the above is a trick of the lens or me playing with an Adobe photoshop function, the picture to the right is of the same work taken close up and off axis.  It allows you to see the 1/16" thickness of the individual layers that make up th entire image.  Because I was satisfied with the colors and the work in general I was prepared to go ahead with the final version of the cutting that would measure 30"x40". 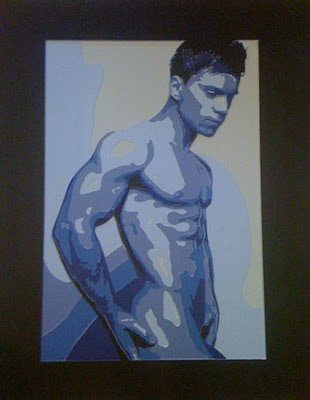 Although I liked the colors of the test-cutting and originally decided to execute the final in similar colors, that didn't workout the way I wanted.  A photograph of the attempt is shown to the left.  The tonal difference between the fourth and fifth layers was too great.  It was never glued together and the pieces of it were destroyed when I completed Charlie in 7.
Posted by Rob Rainone at 7:56 PM