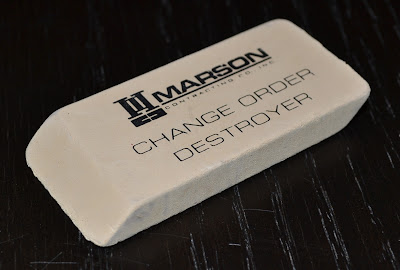 After I had developed a few marketing give-aways that were a little peculiar, notably the toilet paper and business card holder, I wanted to see what else I could come up with.

Three concepts sprang immediately to mind.  The first was that whatever we created had to be something that people would hodl on to.  Too many give-aways develop into things that people give to their children - they approximate toys in some way (a major drawback inherent to the Lego business card holder).  The second was that the item had to be something that people would want to not only keep, but keep out on their desks so that the company name would be in their faces every day.  And the third was that the company tag line would be modified or swapped out entirely depending on what we were putting it on. 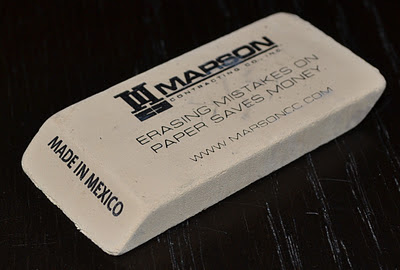 The "change order destroyer" was the first item I developed to comply with these concepts.  It made most project owner's smile when they saw it.  One proudly proclaimed "Finally! I've been looking for one of these!"  The original idea was that it be a Mars-Staedtler eraser, possibly the best eraser on the market today, but the idea proved difficult to execute, so we went with off the shelf erasers (which yes, diminishes its hold-on-to aspect).  But in terms of getting attention, telling you something outside your experience, and getting attention, I think the piece is successful.
Posted by Rob Rainone at 4:49 PM