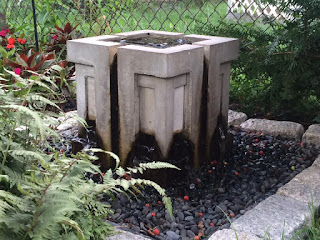 In 2004 I cast a disappearing fountain out of concrete. It continues to work just fine, but I gave it away to a friend who admired it when I got an idea for a new one.

This is its replacement. Water is pumped from a basin underneath into a central well that causes it to spill over into a square trough and is then channeled into grooves cut into each side.

There are drains cut into the four corners of the trough that allow water to fall through the piece into eight openings at the corners. I like the idea of it seeming to do so invisibly.

The photo above illustrates how the cast looks after six months with algae growth, water marks, and a slowly darkening patina on the concrete. Below is it's appearance after one month of operation. 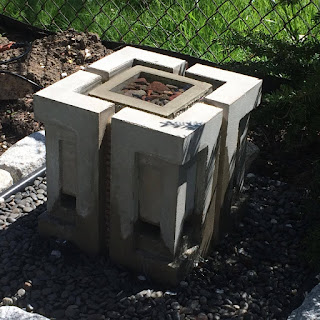