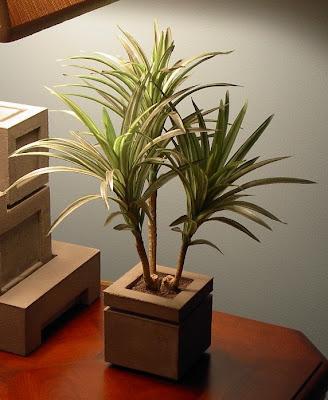 I was in a craft store and found an artificial but nonetheless very realistic house plant in an unattractive clay planter.  It was expensive but I bought it, and decided to break it out of it's pot.  The result was a cube, 4"x4"x4".  I kept it unusually simple for me, with a half inch deep reveal at its base and a similar recess just below its upper edge.  The three pieces of the plant were cast in a separate block designed to be inserted into the larger "pot" block.  This inner block has dirt glued on the top of it to make it look more realistic.
Posted by Rob Rainone at 10:32 PM