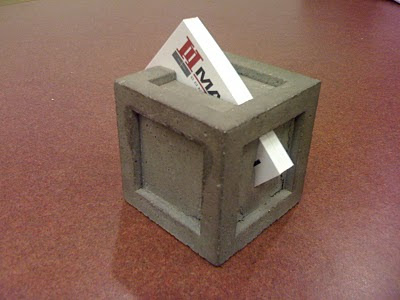 The architect Louis Kahn once famously remarked that he asked the brick what it wanted to be, "...and the brick said, 'I want to be an arch.' I thought I could do the same thing as an arch, span an opening with a lintel that would be cheaper, and the brick said, 'I want to be an arch.'" Frank Lloyd Wright had a similar idea in mind when he wrote that new materials require new forms.  In the spirit of Kahn, I asked concrete what it wanted to be and it said, "I want to be a cube."
Because all of my concrete casts are subtractive (I start with a fairly pure shape, box, etc) and then subtract pieces from it to end up with the finished form, I thought it would be interesting if the cube that the concrete wanted to be had recessed sides, a concrete crystal.  The ongoing design idea then becomes that just like all crystals on earth - they have a pure form, and as they react to their environment they grow in peculiar ways. 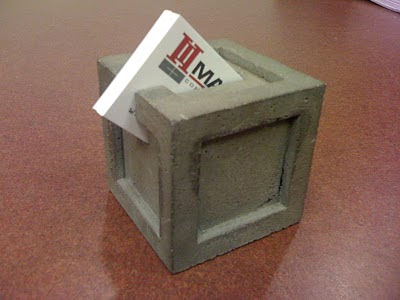 The concrete candleboxes shown in earlier posts could be considered the concrete crystal's reaction to candlight - where it grows thin enough or slotted to permit light to pass through.  The stacked cubes of the lamp grew to hold the bulb off the table.  The crystal forms of the fountains grew in response to water running over them, etc.
This was one of the simplest and earliest tests of the concrete-as-cube idea, a slotted pure 3" cubed form meant to hold fifty or sixty business cards.﻿
Posted by Rob Rainone at 8:22 AM