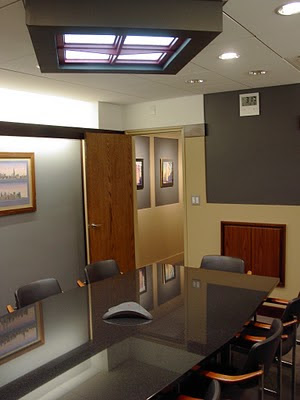 The loft apartment began as just doodling and dreaming in my spare time.  As the design progressed I used 3D modelling tools to refine and develop it.  My boss, the owner of the company I work forwas impressed with what he saw and offered me the chance to redesign the company offices.  To date it's the most expansive project I've been given a free hand with.

The company owns the building which consists of approximately 5000 square feet of office space on two levels and an attached enclosed but unheated warehouse space of another 10000 square feet.  Each time the company found itself in need of additional office space it expanded out into the warehouse.
The offices themselves consisted of a few dozen rooms, often arranged railroad style with one room opening into the next along its center axis.  Because of the repeated expansions, several offices contained windows that had previously looked outside, which now looked into other offices or the warehouse.  The decor was last updated in the 1960's.  While it was clean and worn, it looked dated.
When I asked what the program was, he simply said to me, "Make it better.  Cooler. Show me what you've got."

I got a hold of original floorplans and set to work.  For the most part no exterior features were changed (however, two new windows were added).  Several non-load bearing walls within were eliminated or moved.  Windows between offices were closed, and an additional buildout into the warehouse was added.

For the most part, orginal walls remained, and large rooms that served as offices to several people were cut up into smaller more work-efficient spaces.

It took the better part of a year to complete the construction work of the redesign because it was performed by company crewmembers in between projects, and occurred while the spaces were occupied.
It is difficult to accurately show or describe the entirety of what was done, because it was so site-specific and detailed.  Included in the progress shots below are some before pictures of the same areas. 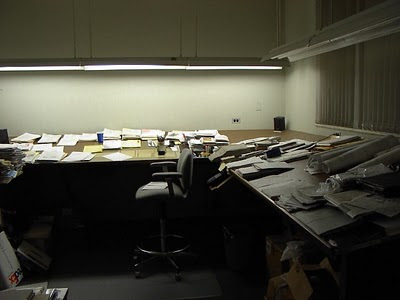 Same view.  The window on the right in the first picture has been changed into a doorway in the second.  The door on the far wall has been cut into an existing wall.  The ceiling was lowered﻿ 8", and actually had to be lowered an addition 4" in the center (hence the detail) in order to accomodated the special light fixtures over the table. 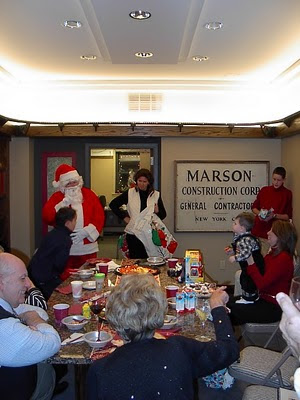 This is the same view, during the Christmas Party held in the office later that year. An original office is being divided here.  The original panelling is being covered with sheetrock and new partitions and knee walls are being constructed between the windows. 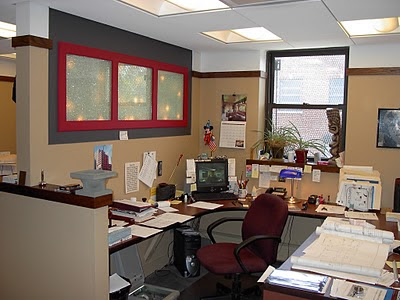 ﻿This is a view of the same office, complete and in use.  The panels over the desk are double paned and filled with shattered safety glass, with lights behind - strictly decorative. 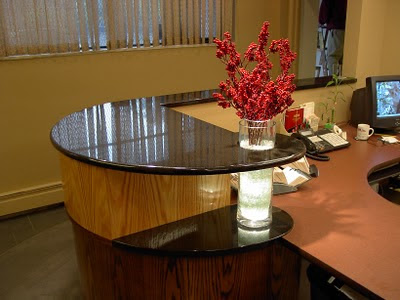 The reception desk vase is actually two vases, one within another with shattered safety glass in the interstitial space.  The assembly is lit by an uplight concealed in the desk below.
Posted by Rob Rainone at 12:09 PM