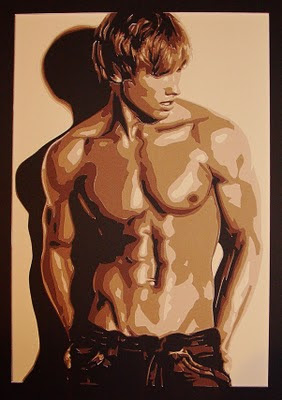 ﻿This is the finished work based on the previous test.  It measures 30"x40".  The two biggest changes (aside from its size) over the test cutting for the same image are the increase in the level of detail, and the change in color.
The former was a natural function of the increase in size and helps to make the work more photo-realistic at a distance.  The latter was based on the earlier interest of showing the models blond hair.
The more cuttings that I've completed the more aware I've become how sensitive the finished work is to the color selection of the mats that make it up.
Of all the various elements of the work, what I'm most proud of is his right arm.  It is being backlit by the reflection of the wall behind him, the far edge of it is bright right where it meets the shadow (which means the cuttings go deeper to the lighter colors).  The contrast of the light and dark in proximate adjacent spaces on his right arm, and in his hair were difficult but worthwhile effects. 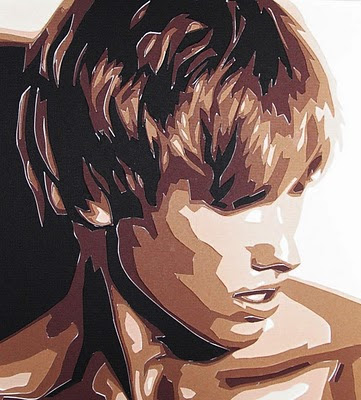 The photograph to the left is a straight-on picture of the detail of his hair and face.  Note that his eyes are nothing more than black pieces cut horizontally across his face. 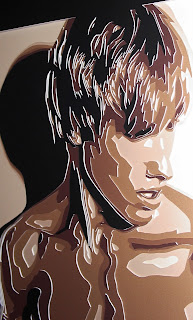 The photo to the right is an off-axis shot of the face and hair detail allowing one to see the layers.

The work is based on a photograph taken by Abreum Garcia of the model John Hoover.
Posted by Rob Rainone at 11:31 PM