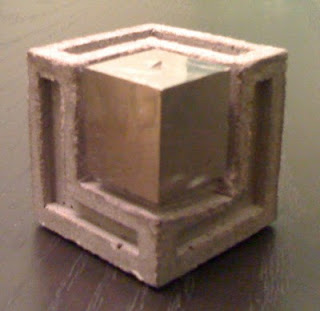 When I was younger I was a rock and mineral collector.  Although that interest has faded, I'm still fascinated by the intricacies of crystals, especially when half buried in other strata.  Sulfer dioxide, also known as iron pyrite grows naturally in several different crystal configurations.  Because I imagine such a thing as "concrete crystals" existing as cubes the form of fool's gold that interested me the most was its cube form.

This cast was a simple 2"x2" cube with recessed panels, made in such a way to receive a single crystal piece of iron pyrite.  The dimple visible on top of the metal is the corner edge of a second crystal growing out of the first. 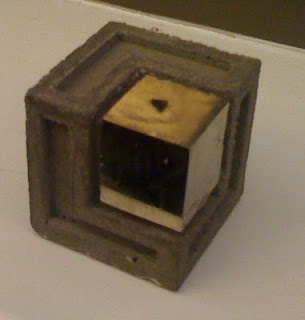 Slots were cut into the buried edges of the crystal.  The concrete of the cast filled these slots effectively locking the crystal in place.
Posted by Rob Rainone at 10:17 PM