﻿ I bought two Parsons Cube Side Tables from West Elm to use as coffee tables.  I figured they were small enough to move around or adapt to other uses, and at the same time sturdy enough to put my feet up or sit on.
Unfortunately the finish on the veneer shows marks rather easily so I initially planned on adding additional coats of finish.  Instead I cast concrete panels that would fit on top of them.
I've often considered creating decorative wall panels or actual tile out of concrete either as something that could be mass produced or as one-off works of art.  I resist partly because it seems too easy to create a shallow mold where the artwork, while still three dimensional, is more about fields of texture in bas-relief. 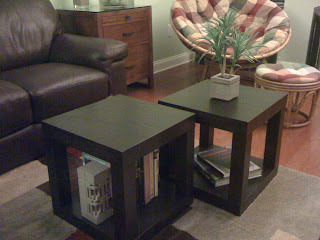 I arranged the tables so that one of them was pulled forward to their respective midlines as shown in the photograph to the right.  The concrete planter with its square shape fit nicely on one of them.
The tops I cast would have to respond to the planter, because I wanted to keep it in that location.  For a while the design actually included a recess so that the planter would "lock-in" to its intended location.
Because I was going to need more than one top, I decided to go with using the rubber casting material I had used previously on the Concrete Pot and the Concrete Oil Candle.  It saved me no time because while casting the second top didn't involve the creation of a second mold; making the original mold out of rubber involved several additional time-consuming steps.  I only used the rubber material to insure that both tops would be identical.
The steps involved creating an original negative mold out of foamboard.  Several pictures are included below.
﻿﻿﻿
﻿
﻿
﻿﻿﻿ Once the rubber had solidified enough to remove it from the mold, it took several hours to get the foamboard off it, even with liberal amounts of release agent applied to the mold before casting.
The picture to the left is a rubber full scale model of what the finished product would look like in concrete.
This model was then placed in a foamboard box and the very same casting material was then poured on top of it.  This would create a rubber negative mold essentially identical to the one I built out of foamboard in step one. 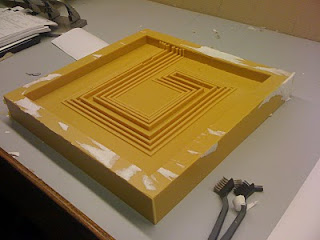 This is the finished mold on the right.  Polytek 7420 as a casting material will bond with itself unless a release agent is applied in between the positive and the negative.  While I did apply the relase agent I wasn't as precise as I should have been insuring that it got into all of the grooves on the positive object.  This resulted in several tears in this casting when it came time to demold.  Fortunately its effects on the concrete casts were minor, and the defects in the mold itself are correctable. 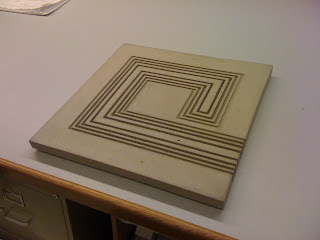 One of the cast finished pieces is shown at the right.  It has a few minor imperfections related to concrete mixing, but overall, and considering that it was completely hand made, I'm happy with the result.  There was some concern that the grooves (which get deeper toward the center) would compromise the panel structurally, but this appears to not be the case. 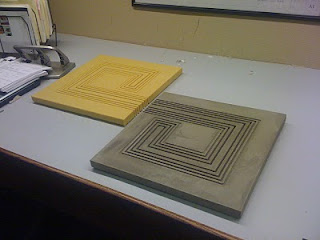 The picture to the right is the very first concrete panel to come out of the mold.  I set it next to its rubber prototype to get a sense of the spiral pattern I was looking to create across the two tables.  The color variations on the concrete are the result of water still evaporating from it. 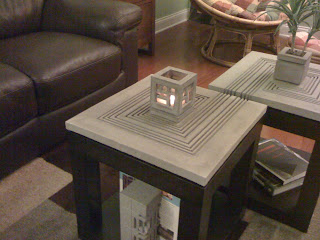 In order to better protect the finished product I applied Aqua Mix water-based "Stone Enhancer" as a finish.  This doesn't affect the appearance but it gives the material a slightly waxy texture.  I don't normally finish my concrete work with any sealer because I like the look of the raw material, and most sealers will change the color, sheen or texture of it.  In this case I did so because they would likely be subject to the occasional food or beverage spill
Posted by Rob Rainone at 9:14 PM