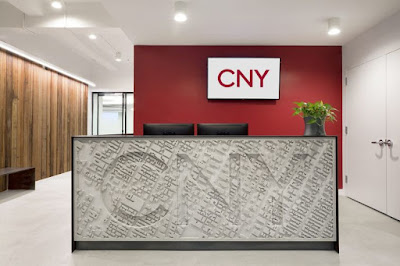 After entering into an agreement to further develop Siteline (later renamed KAEO) with one of Out of the Box's clients, they discovered my portfolio of artwork online, specifically the Conference Room Logo and expressed an interest in my designing something in concrete for them.

Although the ultimate idea came to me in an instant - the company logo overlaid on a map of midtown Manhattan, the development from concept to final design took several months.

The first idea I had was to simply press a technical drawing - a detail of a foundation section, something like this image with a prominent company logo, but this didn't really feel like a design at all.

I looked at an Apple map (not the best source I admit) of the area where their office was and saw cropped building dotting a landscape. And that gave me the thought - what if it was a map of Manhattan - cropped down to a low height? 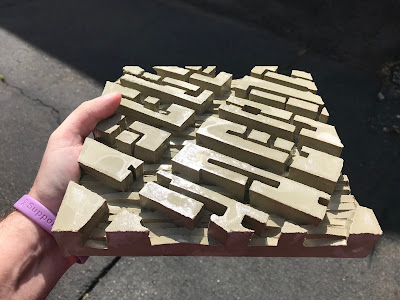 With that as an idea I used a piece of polurethane rubber that I cut through with an X-Acto before pouring concrete over it. This showed me that it was possible, and that the buildings would be sturdy at roughly .5" tall.
The image below is how I imagined it may appear - the logo pressed into streets, but appearing to allow the buildings to run uninterrupted on top of it.

The buildings appeared to be too big and hid too much of the logo - so I had to resize it, so that that instead of stretching across one neighborhood, it appeared to span from The East to The Hudson Rivers.
At this time it also became apparent that Apple Maps had less than accurate representations of the buildings that I was looking to model so I determined that I would have to draw my own map using satellite photos as a guide. I had to use a high resolution composite image to achieve the scale I was looking for. 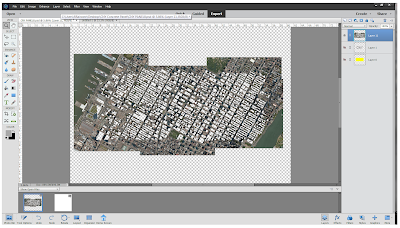 I used the photo and then set about "erasing" the buildings that would appear on the finished piece. The offices of CNY are on the 4th floor of their building - about 55 Feet off the street. I used a 3D model of the city as a guide and erased any buildings that appeared to be above that height. Because CNY is a construction company, only buildings were taken into account, roadways and roadway structures were ignored, along with all buildings below 55 feet. 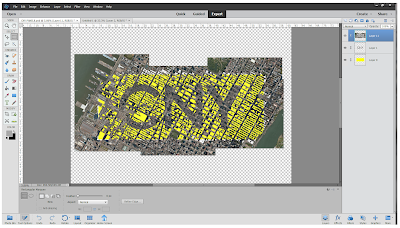 I created a layer underneath the map as a guide. This would let me know when I had erased enough buildings and give me a sense of scale. In the end it turned out to be too big - I didn't want to press too far into the rivers - and I scaled it back some.

The contrast on this image was then manipulated and cropped until I had a black and white image of the buildings, a slice of New York at 55 feet.

This image file was then traced in AutoCAD, and laid over a vector file of the logo. Because the finished dimensions of this cast were outside my comfortable working limits these files were then handed off to Trueform Concrete to mold and cast. 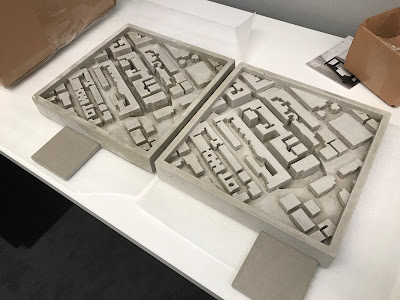 There was some concern that the logo pressed into the street would not be visible if the "rooftops" of all the buildings was the same, so we asked Trueform to cast a square foot sample of the most complex portion of the piece (the upper right of the "C"). The concern was justified because while the logo is visible, it just gets lost in the noise of the building pattern.

To overcome this problem without paying for a lot more sample casts we built a 3D model of the previously draw CAD file. This allowed us to experiment with the logo and buildings within it depressed at different heights. It was ultimately decided that all buildings would be one half inch tall, and that the logo would be depressed one inch below the street level. This allowed the line of the logo to appear to cut across buildings and maintain its integrity so as to remain visible even at a distance. Or so we hoped. Digital models while accurate in proportion don't always model lighting and shadows correctly - and this piece is all about light and shadow. 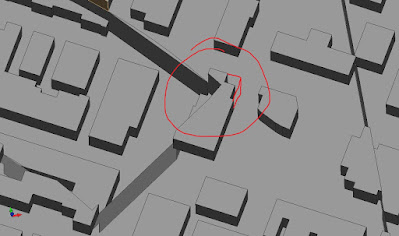 This also required we re-examine every intersection of the logo and the buildings to prevent any parts of the future cast from being susceptible to breakage for being too small. Some liberties were taken with narrow buildings or buildings compromised by the logo that cut into them as seen on the right. 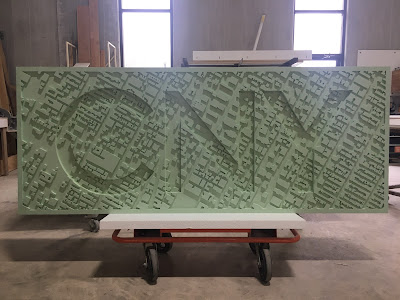 It took months but eventually Trueform sent an image of the block of foam that had been routed with the design. They declared it the most detailed piece they had ever worked on. The logo was clearly visible so I was satisfied. 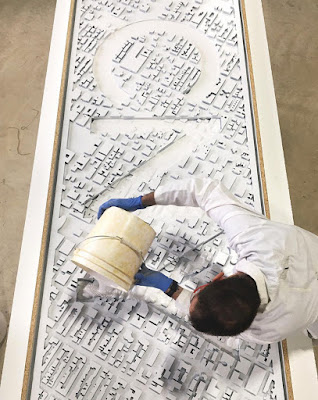 This foam mold then gets painted with a white sealer and release agent before being covered in a mixture of silicone rubber. Apparently 18 gallons were used to make the mold for this cast. 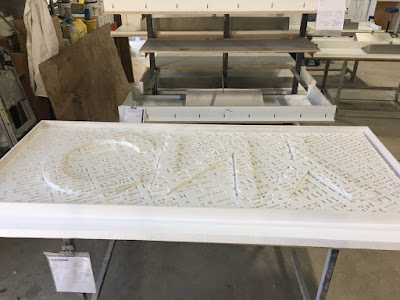 The finished mold is visible to the left. 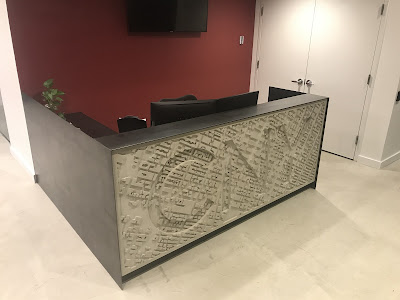 The completed desk is on the right. 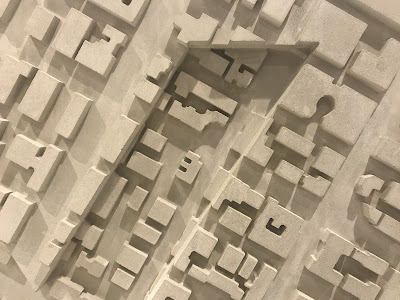 Detail view of the Y 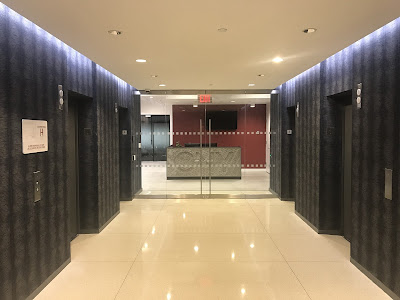 View of the desk from the elevator lobby. It was featured in an article written about CNY's new offices in Commercial Observer.